I’ve discussed my Nest thermostat experience a few times and am slowly becoming less convinced that it is ready for the market if you’re at all technically savvy and you’re easily frustrated by things not working the way you’d expect (like, you know how to setup e-mail on your phone).

Here’s a image of the schedule for the second floor, where my computer/den is located. 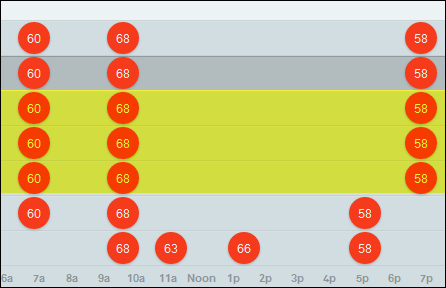 On Monday and Tuesday of this week, my wife and I had the day off and were home most of the day. We spent a lot of time upstairs as her computer and crafting area is on the second floor, as is my den. So, the heat was turned up most of the day.

The “learning” mode of the thermostat decided that as we were home two days in a row, that the whole week likely was going to look like that apparently. As you can see, the same schedule was replicated through all week days.

On a normal morning, I often go to my den and do a bit of tinkering before leaving for work. However, I rarely turn up the thermostat and instead just leave it at the preset temperature. I’m not in my den long enough to justify the amount of energy it would take to heat the second floor.

So, it’s frustrating that the thermostat would turn up the heat automatically at 9:30am, long after I’ve left for work and then run it all day long. Thankfully, after 3 hours, it apparently realizes there’s no one home, and will automatically adjust the temperature.

Since I didn’t turn the heat UP, I don’t expect to need to turn it DOWN before I leave (I leave earlier than 9:30am). (Turn it down from what?)

I could turn off the learning features. But, then one of the key features of the thermostat is turned off: 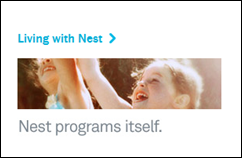 GregN left a comment yesterday where he mentioned that Nest support recommended to try turning of the learning feature (activating “learning pause”).

Now, I need to go fix the schedule to reflect my reality. Again.

Nest, are you listening? This is a perfect example of my user experience not matching with the expectations Nest has set.

I tweeted this post (and directed it at nest and they did respond): 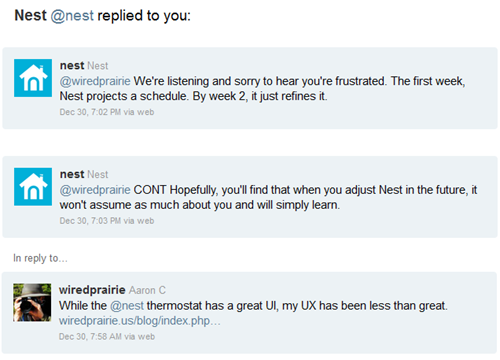 My wife had the day off on Friday (Dec 30) and adjusted the downstairs thermostat after lunch. Apparently, the thermostat believes that’s going to be a new routine for Friday’s (at about 1:30pm, temperature is set to 68F).

Just the day before I’d fixed the schedule for every day. It’s not taking into account manual schedule changes and giving them proper weighting.

The learning algorithm needs some help.