Inspired by some modern applications (especially the “Metro” look and feel), I wanted to put together an animated tile reflow script for an HTML page I was creating.

As the size of the page changes, the tiles move into their new positions. 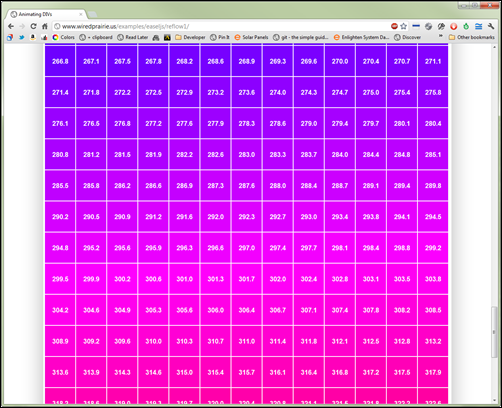 Relayouts are queued (as to prevent multiple from running).

Only boxes that will be visible to the end user (either animating to the screen or off the screen) are animated. It does not animate elements that do not start or end in the current viewport including boxes that would animate “through” the current viewport. I considered the latter to not add anything to the overall experience and just uses more CPU to perform the animations, so I intentionally left it out.

In the layout loop, the code verifies that the animation needs to run:

If it needs to animate, the code uses the static Tween method “get” to start an animation on the current element.

All the code used by the demo is in default.html.

Colors of the boxes were set using hsl (only available in modern browsers):