Here‘s the code. I used a standard Flutter app template and also added a few packages to the project.

I’ve coded a substantial amount of Windows Presentation Foundation (WPF) and Silverlight code over the years. One of the concerns that often came up was the UI tree …, the more complex it was, the slower the app often was without lots of tricks. Using the new inspector for Flutter apps, I selected one of the images in the UI. Needless to say, there are a few objects created to represent the UI tree. In fact, I had trouble capturing the image for this blog post. :) 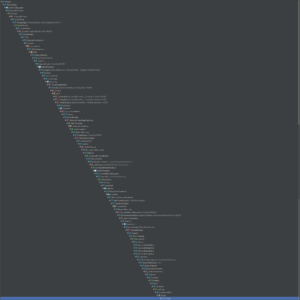 I don’t have evidence that this generally will be a performance problem. Maybe with relatively simple mobile applications, a deep rich object based UI hierarchy won’t affect performance as much as it might in a desktop application of reasonable complexity. Regardless, it’s worth considering as you build a UI.

Back to what I built. When a user taps on a board game in the list, I’ve wired the code to call the _showGameItem below. I appreciate that there’s an easy way to navigate to a new page on the stack and show a UI, all within a single function. Of course, I could have split it into multiple builder functions if needed.

To register an event callback for the onTap, I’d tried finding a Widget that exposed it directly. I’m accustomed to elements having events (often bubbling events) that would have exposed something like onTap. However, with the exception of specialized widgets like Buttons for example, it’s not exposed on most Widgets (even those that have UI). So, at the outer layer of the items being shown in the ListView, I used a GestureDetector to capture the tap event:

I would have preferred that the Container to have the event available. Maybe it’s not as pure, but, meh. I’d like to reduce the noise of building a UI and adding yet another layer just to capture an event is a distraction.

Architectural elegance does not always lead to a framework that is easy or friendly.

While I wasn’t really concerned about performance of my application or the possible impact from hitting the BoardGameGeek API a few times, I used application storage to cache a copy of the XML data that’s retrieved from BoardGameGeek just to get some experience with the APIs. Further, I added code to store the next time the file can be updated to the SharedPreferences object instance (to prevent it from being updated too frequently). I liked the simple exception handling in Dart as it’s relatively low impact to handle a specific exception type without caring about the details by using the on clause (just by dropping the catch(e)).

When the file is cached completely and successfully, the Widget state is updated, which triggers an application refresh, which is what happens on lines 29-32.

Had Flutter been an option in the earlier days of Android, it would have been a strong contender in the application building space, especially that it runs on Android and iOS. From reading some of the issues on Github, the general consensus is that the cross-platform Flutter competitor to beat is React Native. In fact, I’m surprised that it has taken Google this long to produce a potentially viable alternative to the Java Android development tools. I’d honestly thought they’d announce something several years ago (I’ve watched Google I/O for many years for the announcement).

If Android devices were upgraded more routinely (as are iOS devices), web technologies such as installed progressive web applications could be a serious contender and alternative for many application types. But, modern Android operating system versions are very slow to roll out (if ever) to the majority of devices.  Over half of Android devices are running Android 6.0 or earlier. 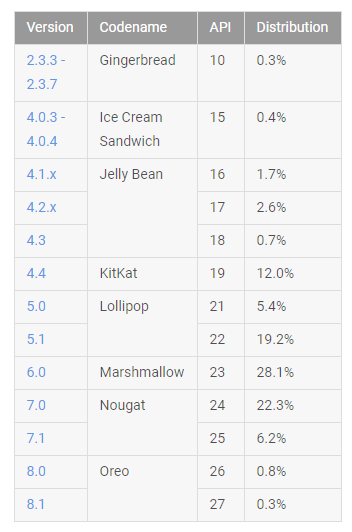 Until the Android OEM ecosystem delivers timely updates to all phones newer than 5 years, solutions like Flutter (and competitors) remain a potentially reasonable way to reach a large variety of devices without needing to update to recent OS releases. However, it may be that the hardware hosting older versions, such as 6.0/Marshmallow and earlier are not capable of adequately executing a modern app built with technology like is used by Flutter.

I still find the syntax of building a UI to be cumbersome and frustrating for several reasons: 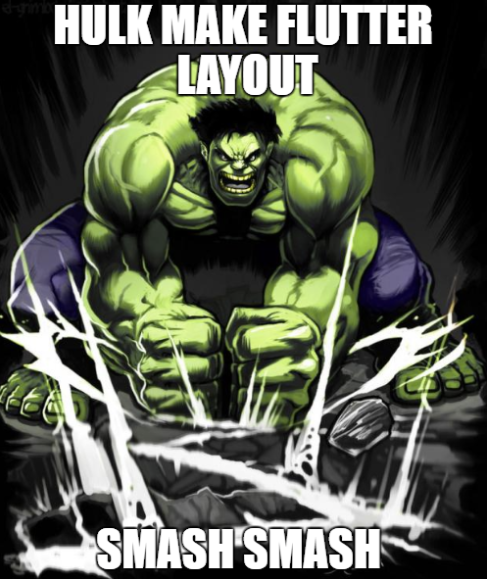 Does Flutter have a future? Would you want to build an app that you wanted to still be building on 3-4 years from now? As it’s still in Alpha form, I wouldn’t do anything but explore.

Then, there’s Dart. The strength of many development options for mobile and web development is the ability to concentrate on one programming language and have it work on client and server. With Flutter and Dart, if you don’t have a serverless-style architecture in place, you’ll need to use a second programming language. And that may limit its adoption. Of course, developers that work on multiple app platforms today have accepted this is just the price they have to pay, so maybe that’s not a big deal. If you’ve got a development shop that can have developers specialize, then this may be a non-issue entirely. For startups and very small teams, it’s a potential obstacle that must be considered.

If you try the code as I’ve put it on GitHub, you may encounter an error with a codec. This is actually a bug in the Flutter framework and apparently is fixed already and will be available generally at some point in a mainline branch. You’ll just need to rerun it.

Note the parentheses on lines 20 and 21. That style causes me to just keep adding closing parentheses until the syntax is correct or the error is different. They’re very difficult to count.

Android Studio is an acquired taste from a theme and style perspective. With a few adjustments, it’s tolerable. 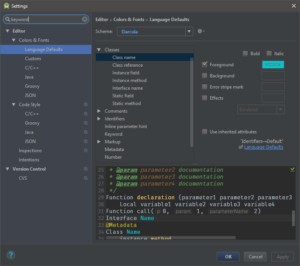 I’m not sure why Keywords in the Darcula theme are bright, bolded orange. While keywords are important, they’re unnecessarily vibrant, especially in code blocks describing the UI:

I turned off the bold minimally and changed the color of class names as an experiment … it’s better, but not right yet. 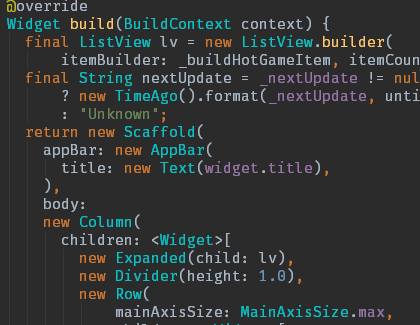