While waiting a VERY long time to look at a page at Adobe’s online store, I decided to use YSlow (a free Firefox plugin) to do a bit of analysis. 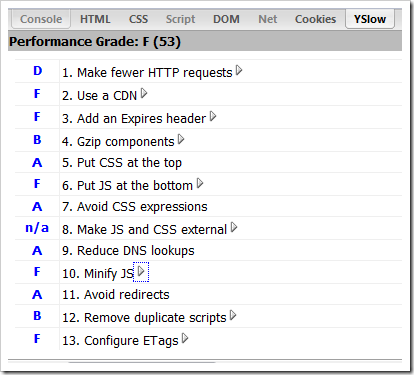 It’s too bad more web applications don’t use this (or at least learn some of these concepts as it would save all of us time on the Internet!).

If you’re doing web development, I’d highly recommend you at least try the tool a few times during the development cycle. You may choose not to follow all of the advice, but if you do, you’re users will likely thank you!

You’re given the size of a rectangle, with a width and a height. The X = 0 and Y = 0 point is located in the upper left with the width and height in the lower right. The function you must write takes an array of rectangles (left, top, width, height). Return a list of intersecting rectangle groups. If, for a example, a rectangle is not overlapping, it should be considered a group of one. If two rectangles overlap/intersect, create a rectangle which is inclusive of all points within the two rectangles, and return that as a group, and so on.

A rectangle can be in only one group/set.

“The download limit for this time period has been reached (wait 10800 seconds and try again). Sorry for the inconvenience.”

I don’t usually measure in seconds when it’s more than a few minutes … what about you? 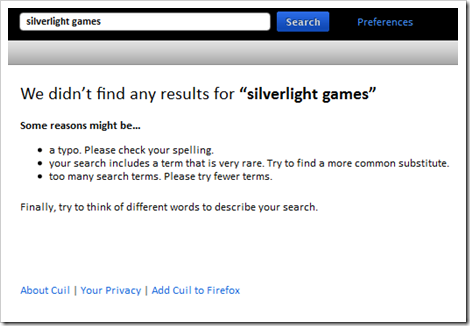 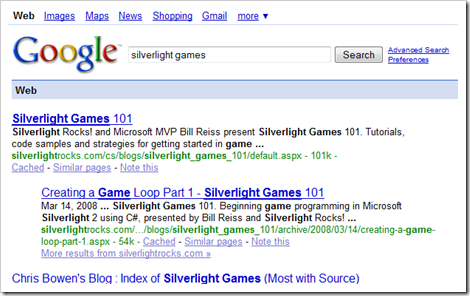 Hopefully, soon, I’ll talk more about why Silverlight games were of interest …

As reported by The Register, Mark Shuttleworth, founder of Ubuntu Linux said that the company is working to make the Ubuntu desktop “more beautiful” in the next two years — to something that’s art.

“I think the great task in front of us in the next two years is to lift the experience of the Linux desktop from something stable and usable and not pretty, to something that’s art,” Shuttleworth said.

“Think of the way the iPhone uses a pure software experience, it abstracts away all the hardware,” he said. “You can paint anything on the screen because it’s all software.”

I’ve said it before — people just want something that works. Plain and simple. There’s edge cases sure–but they don’t count (sorry). Apple has an edge right now because of a false perception of Vista in the marketplace, one that Apple successfully groomed and grew through a series of very successful (and very misleading) advertisements (the Mac and Windows guy ads). Apple has YEARS of experience with user experience. So does Microsoft (I’ll point out that one of Microsoft’s biggests problem with user experience is the desire to not make a large group of users unhappy by changing the operating system dramatically — it’s not by any means due to lack of designer talent). Comparitively, the Linux camp really has zero years of experience competitively.

Can the Ubuntu crowd innovate and not copy? Linux GUI’s have historically cloned, not innovated. 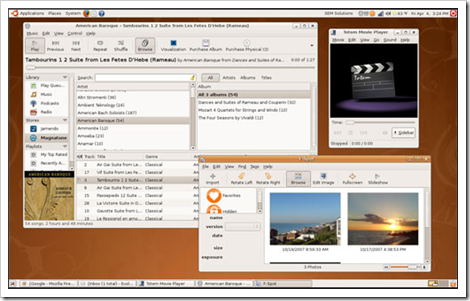 Ubuntu seems to be a mix of OSX and Windows.  Take a look at KDE though (the shell of choice for many Linux distributions). 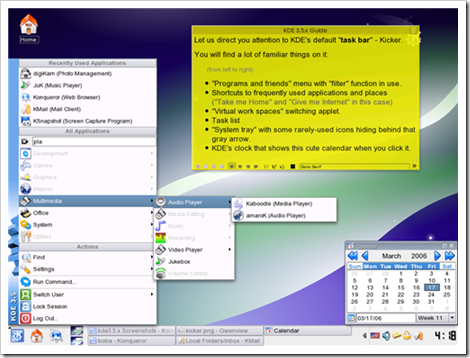 Wow! Look, on the left is the “start button”, followed by the “Start” menu from Windows 2000 (or maybe a little earlier).  Let’s see, big ugly quick start buttons. A Calendar that looks more like a toy than a professional widget, 2 rows of tasks in the “task bar”, and a series of tray icons for some things that must be running that are always available. For haters of Windows, they certainly copied the user experience adequately.

If Ubuntu creates something that is “art” … will it be so different that few will adopt it?

I’m interested to see what happens … will they be able to innovate on the Linux platform or will legacy applications and requirements (the platform) hold them back? Even eye candy won’t make Linux easier. If they can take the “unix” out of Linux … then, maybe they’ll have something (or do what Apple did, and take just the good of a platform and shield users away from it at all costs, except allow nerds access).

It’s going to take more than a few years and a desire to make this happen. Even having funding won’t necessary make it happen. Look and Lindows, I mean Linspire, I mean Xandros Linspire. They had staff, funding, and a desire to put Linux on every desktop. Bzzzzzt. Didn’t happen. What’s changed?

Are you interested if something came out from Ubuntu? How revolutionary would it need to be for you to adopt? Or have web applications made platform matter less?