I’ve done a lot of reworking of our computers and network recently and thought I’d post some details about the various physical and digital parts that make our humble WiredPrairie home work.

Using Google Docs, I created a labeled diagram with most of the moving parts of our house (WOW, Google Docs Drawing is an amazingly decent vector drawing editor!). I’ve intentionally left off some of the noise including PCs and laptops, and a few unloved devices. 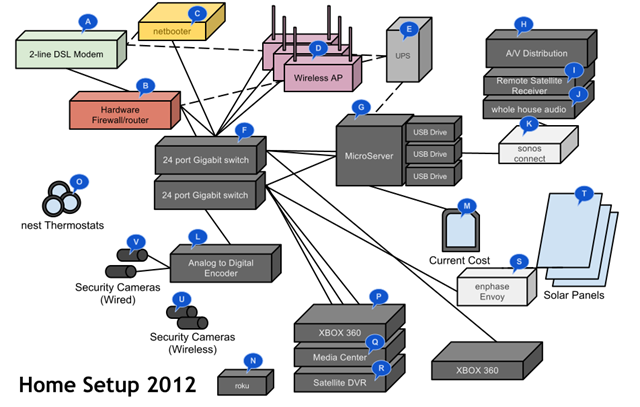 And that represents the majority of things we’ve got setup in our house right now. I’ve tried to include links to the original product page or where I bought a given product if available (or to a newer model if the older one has been discontinued).

I’m so embarrassed by the state of the wiring and setup of the majority of the equipment mentioned above that I’m not going to include a photo. It looks like a child’s messy toy chest, filled with wires and various rectangular boxes with blinking lights.